When you book with an account, you will be able to track your payment status, track the confirmation and you can also rate the tour after you finished the tour.
Sign Up
2109

This ride follows in the tracks of Ilirian King Skerdilajd, on his way to conquer Kaonia 2,300 years ago. Experience unspoiled nature, colorful culture heritage, welcoming people and ride reliable, strong horses. Wind your way through a variety of landscapes combining mountain climbing, steep downhill and uphill rides, river crossings, woods and the seaside. Here you will find ancient ruins, castles, churches and monasteries sitting adjacent to the bunkers and military infrastructure from communist past. During this period of isolation and militarization, communist leaders built around 750,000 bunkers of defense in case of attack from western “enemies”.

This is a mountainous trail ride with around 5-6 hours riding and some walking every day. The horses are small but very robust and surefooted Arab and Tarpan cross. Participation in this trail will allow you to experience true Albania with the best local cuisine, history and hospitality. You will be accommodated in local or family guesthouses every night where your host families will provide a delicious local meal and conversation is enjoyed by all over dinner. Most of the dishes are homemade while fruits, vegetables and meat come from local gardens and farms.

Included: All accommodations and meals from dinner of day 1 till breakfast of day 8, English speaking guide, second guide (if more than 4 riders), water and drinks during the meals, luggage transport by car from destination to destination.

Note: First meal is dinner of the arriving day and last meal is breakfast of the last morning.

Not included: Flights, entrance tickets in monuments or parks, lunch on day 1, extra drinks, other services or expenses during free time.

Transfers from your location to Gjirokastra

Plan your flight to arrive at Tirana airport ideally in the morning, but no later than 15:00 – this leaves time for the transfer and to be able to visit the town of Gjirokstra. Driving to Gjirokastra will take round 3-4 hours. Settle into your hotel, 10 minutes walking from the center of historical Gjirokastra .You can have a walk around the historical town and the old Bazaar before dinner. Riders can also visit Enver Hoxha’s house, Gjirokastra castle, the church of the Old Bazaar, the mosque of the Bazar and Skenduli house representing an ideal sample of Gjirokastra traditional life. Dinner will be served at a traditional restaurant. During dinner your guides will be able to speak to you about the trail: possible requests or needs, advice and things which are good to know. We recommend that you buy a map of the area before dinner in order to gain a good understanding of the itinerary.

You will start riding from our stable at 360 m or from Viroi’s Lake of Gjirokastra, at 220m above sea level depending on the weather and possibilities to cross river Drino. You will be astonished by how this mountainous ecosystem changes so suddenly. The ride heads through hilly terrain, small rivers, and pine woods, steep down and up hills. Lunch will be a home prepared picnic at the monastery of Cepo. We can visit the monastery which is an important orthodox cult object and has one of the most strategic views of the Drinos Valley. Located on a historical scale it cuts down a rocky slope on the north side of the “Wide Mountain”. Today only two objects remain from the former monastery complex: the basilica with a dome and dozens of former guesthouses which have hosted travellers for centuries. After lunch we ride down to the river of Kardhiq. There are some really interesting things to see in this area such as pillar rocks “Gods of the Light” and other nature monuments- these have got specific forms of pillars or columns 3-4 m high, which differ from far away. Today’s ride finishes after around 5-6 hours at the village of Fushbardha, one of the most important centers of Laberia´s area. Labëria Laws originate from ancient times and were reintroduced by Julie Pope, who lived in the XI century. During the Norman invasion in 1081 he was described as a priest and Mayor of Kurvelesh. You will spend the evening and night in a village house enjoying homemade traditional food and drinks.

After a traditional breakfast at the family house we will get ready for a very long day riding (up to 8 hours). Our ride will follow the tracks of the King Skerdilajd Army which passed through the “Neck of the Rock” around 2,300 years ago. For the first time, King Skerdilajdi was mentioned as the commander of the 5,000 troops sent by Queen Teuta in 230 BC against Epirus. He was the youngest brother of King Agron and one of the main supporters of Queen Teuta. He led the invasion army in 230 BC to the capital of Epirus Phoinike (Finiq). King Skerdilajd played a determined role in Teuta´s plans to create an Adriatic Front against Rome. The path combines beautiful woods, mountain climbing, rocky landscapes and ruins of ancient civilizations. Basha Stones, Dhespina cave, the Rock of Kaze, The Valley of Cheries, the Crooked Brook, Shameti Brook, Trullas Neck and Derrasa Hole are some of the local sights en route today. Our lunch break will be at a mountain valley surrounded by a small oak wood. We continue through the mountain of Borsh towards the next village. The whole day´s landscape offers images of wild unspoiled nature. Flowers, old trees, streams of water shepherds, hundreds of goats, sheep and cows will be part of this riding experience. Be prepared to walk round 1 hour 30 minutes during the day in difficult paths and steep downhill’s. Good mountain hiking shoes are recommended for today. We will arrive at a family house late in the afternoon and enjoy traditional food, rich in olive oil. Wine, raki and mountain tea will comfort you to sleep after the long day.

Riding hours: 8 (including walking by leading the horses)

After a traditional breakfast with the shepherd’s family, we will start a shorter but very pleasant riding day. First we will visit the castle of Borsh (known in history as Castle of Sopot) located on a hill in Borsh´s village at 500m above sea level and dates back to about IV-III century B.C. Its surface is rocky. In the Byzantine Empire, Emperor Justinian put it on the list of fortifications in the years 527-565. Sopot is mentioned in 1192 in memory of Anna Komnenes, daughter of the Byzantine Emperor Alexis I Komnenai. In 1266, Sopot was in the French power of Charles I of Azhuin and then under German jurisdiction, and later on, for a long time under the Republic of Venice. In the middle Ages, it was adapted for military garrison and took full view of the fortification at the time of Ali Pasha. The mosque was built at the castle by Haxhi Bendo, one of the supporters of Ali Pasha.
After visiting the Castle ruins we will start a 3 hour ride from Borsh and take the old road along the seaside. Olive trees, oranges, lemons, citrus and grapefruits are planted everywhere on the upper part of the road. Many defense bunkers remained along the seaside of Piqeras, an old fishing village. We will stop the ride in the village and drive to the sea for a lunch break on the beach. After lunch we can enjoy a fairly long break to enjoy the sea and to rest. You will spend the night in a family house tasting seafood, the special local cheese and salad. Homemade raki and wine will be offered with the meal.

This morning we’ll enjoy breakfast on the terrace with the beautiful view of the Ionian Sea. You can enjoy traditional coast byrek (cheese pie) and cookies, butter, fresh milk and honey. Today we head down to the sea through olive tree terraces to the beach of Bunec. We will ride up again to Lukove village and down to the sea again through some challenging landscapes. You will reach the Shpella beach for lunch. The lunch stop includes possibilities to swim and relax for several hours. Later we continue by first entering a small “jungle” of trees, bushes and rocks, meeting the remains of an old road connecting the sea with the villages of the upper coast. In the afternoon you will visit the village of Shen Vasil, a very old mediaeval center. The village suffered a long period of terror during the dictatorship being a labour camp for political prisoners. Hundreds of intellectuals suffered and died in this camp during 4 decades. The family can share with you memories of a very dark period of Albania. Traces of the past are visible everywhere. Your accommodation place was the ex-dormitory for soldiers that served the camp.

After breakfast you will reach the Valley of Kalasa River and later the hilly valley of Prapanica, and use the chance for a very nice and long gallop. You we will ride back along King Skerdilajd Army´s route. South of the river Kalasa valley you can see the Foinike Hill. Exactly there, Skerdilajd’s army stopped to face the Epirot army in 229 B.C. Olive trees and nice paths for gallops will make this day very interesting and picturesque. You will continue to ride through the village of Fushe – Verri . You can see the bunkers of the cold war along the ride, representing the military ideology of the system. You can stop for a picnic lunch under olive trees.
You will reach the Skerfica mountain neck named after the King Skerdilajd Army pass in the afternoon hours. Here you can enjoy the cold mountain water and another short break. You will pass an old Phosphor Mine, an ex-labour camp for the political prisoners of the communist regime. Further on inside the village of Fushbardha, there still exist the old abandoned buildings of the ex-labour camp. Fushebadha, is a destination that you have already visited in your first riding day. Dinner served in the garden will let you enjoy the homemade food, the fresh mountain air and the hospitality of the local family.

After a traditional breakfast you will start ride back to our start point, Gjirokastra town. Today is going to be a diverse landscape ride. We will ride first to the Valley of Kardhiq River and later will meet the traces of the first riding day. The ride will finish right where it started – near Viroi Lake. Pine woods, mountain valleys, water springs, fresh air and flowered landscapes will be the panorama of this day. We will drive you to our horse stable to introduce you to our way of managing and to the horse’s life.
Your accommodation will be the same hotel in Gjirokastra town. A farewell dinner late in the afternoon will be enjoyed by all.

After breakfast at the hotel you will be transferred to Tirana airport. 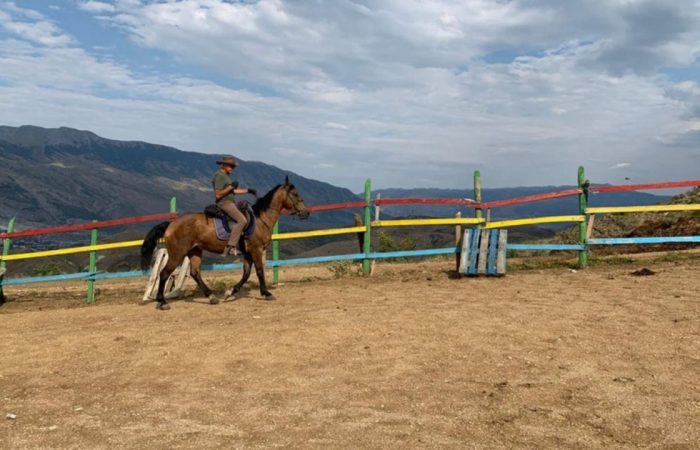 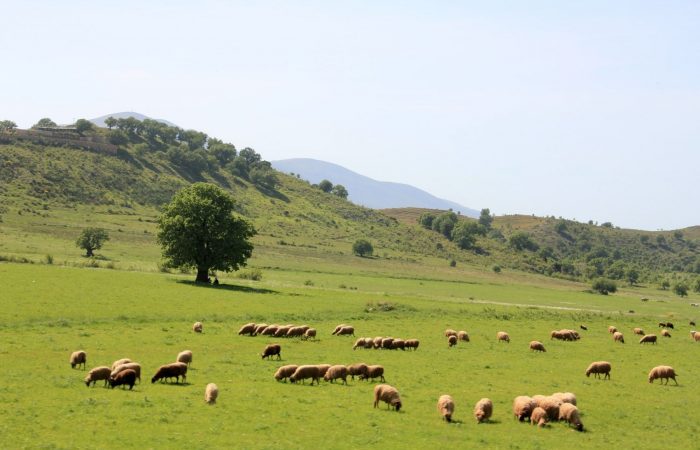